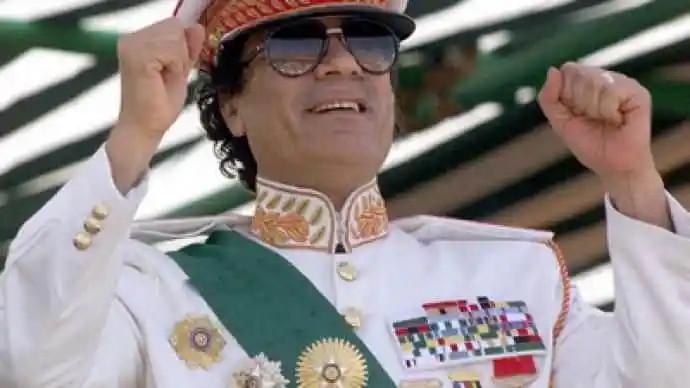 2 The Real Reason Why They Killed Muammar Gaddafi

The Real Reason Why They Killed Muammar Gaddafi

Gaddafi really cared about his own people, free water, education, healthcare, electricity, but unfortunately he was betrayed by western powers who wanted to maintain status quo, especially in monetary policy

This is a copy of the original – posted with permission from the author.

2. Gadaffi Proposed $400 million African Satellite – gadaffi alone came up with $300 million for this project.
For those who ask, whats the big deal in it, it’s really a huge set back for European western countries, because they get paid by Africa every year $500 million in rent for the services European satellite provides to Africa.
Africa being self sufficient is definitely a set back for western economy.

3. AMF: African Monetary Fund – No more borrowing from Rothschild Central Bank for African countries, AMF was planned to produce its own currency for Africa, backed by Gold standard.
Interest free.

6. Gadaffi planned to free the entire African continent from the clutches of Western imperialism.

* In Libya there are four major underground basins, these being the Kufra basin, the Sirt basin, the Morzuk basin and the Hamada basin, the first three of which contain combined reserves of 35,000 cubic kilometres of water. These vast reserves offer almost unlimited amounts of water for the Libyan people. *In the 1960s during oil exploration deep in the southern Libyan desert, vast reservoirs of high quality water were discovered in the form of aquifers. * thus Gadaffi, started the construction for the Phase I of the $25 Billion “Great Man made River Project” in 1984.
The Great Man-Made River (GMR) is a network of pipes that supplies water from the Sahara Desert in Libya, from the Nubian Sandstone Aquifer System fossil aquifer. It is the world’s largest irrigation project
As of now, almost all three phases has been finished by the Libyan administration .

Here is the $70 trillion Blue Gold in Libya, that caught the most attention and Love of Bankers.

SOE TV
After 42 years at the helm of his sparsely populated oil rich nation, Muammar Gaddafi lost his grip on power after a six month uprising. This documentary explains in detail the real motive behind his capture and eventually his death.

The Afrotainer
How can you adequately describe someone like Colonel Muammar Gaddafi? You can’t! The Libyan leader paraded on the world stage with a style so unique and unpredictable that the words “maverick” or “eccentric” scarcely did him justice. Here are 10 things you never knew about this man Gaddafi.

Journeyman Pictures
Gaddafi Interview (2010): Colonel Gaddafi, former premiere of Libya, is questioned on many topics including terrorism, Palestine and Israel, the Lockerbie bombing and more.
In this rare interview shot in February 2010 – less than two years before he was killed while hiding in a culvert – Muammar Gaddafi tells presenter George Negus he’s always merely represented the will of the people.
“For 40 years I have not been the ruler, the authority has been with the people,” says Gaddafi calmly. Surrounded by security guards and local TV crews in a library of his military compound, which was bombed by the Americans back in 1986, Gaddafi gives an air of quiet confidence. He continues to deny responsibility in the Lockerbie bombing and advocates a one-state solution to the Israel and Palestine conflict. He also comments on Libya’s nuclear programme, and shares his opinions on terrorism and democracy. Quizzed by Negus about his softened image, Gaddafi responds that “It is the world that has changed.”

5 The Imam and the Colonel | Al Jazeera World

The downfall of Libyan leader Colonel Muammar Gaddafi last year was greeted with great hopes for the rebirth of a nation.

But there was another hope felt by many inside and outside of the country – that the end of his 42-year rule would allow some light to be shed on the fate of a charismatic Lebanese cleric.

Imam Musa al-Sadr, the leader of Lebanon’s Shia Muslims, disappeared, along with two companions, in the summer of 1978 during a visit to Libya to meet Gaddafi.

As in the Shia myth of the ‘hidden imam’, this modern-day cleric left his followers upholding his legacy and awaiting his return.

The enigmatic cleric’s popularity had transcended religions. Calling for social justice and development, in 1974 al-Sadr founded the Movement of the Deprived – aiming to unite people across communal lines.

Archbishop Youssef Mounes of Lebanon’s Catholic Information Centre remembers a sermon al-Sadr delivered in a church, in which he warned of an imminent sectarian war.

“It was a surreal scene,” Mounes says. “Seeing the turban of a Muslim imam under the cross in a Christian church. He delivered a sermon at a very significant time.”

When civil war erupted in Lebanon in 1975, al-Sadr led anti-war protests. And as the war intensified, so too did al-Sadr’s efforts to end it. As part of this, he toured the Arab world to plead the case for south Lebanon.

In 1978, this took him to Libya where he was due to meet Gaddafi.

He was never seen again.

In the years since conflicting stories have emerged about what happened to al-Sadr and his two companions. Now hopes have been raised that new evidence and witnesses will emerge to help solve the mystery of the missing imam.

Al Jazeera English
In late December 1988 a terrorist bomb destroyed Pan Am Flight 103 over the Scottish town of Lockerbie and killed 270 people.

Only one man, Abdel Basset al-Megrahi, a Libyan citizen, was tried and found guilty of causing the explosion. But he protested his innocence at the time of his trial in Camp Zeist in Holland in May 2000, and continued to do so up until his death in Tripoli in May 2012.

For three years filmmakers working for Al Jazeera have been investigating the prosecution of al-Megrahi.

Probe identifies suspects over Lockerbie bombing
Two award-winning documentaries, screened on Al Jazeera in 2011 and 2012, demonstrated that the case against him was deeply flawed and argued that a serious miscarriage of justice may have taken place.

Now, in our third and most disturbing investigation, we answer the question left hanging at the end of our last programme: if al-Megrahi was not guilty of the Lockerbie bombing, then who was?

The New Libya (2003) – After years of isolation from the international community it looks as though Libya is on the road to reform.

Colonel Gaddafi is the longest serving Arab leader in power. After seeing the deposal of his old ally Saddam Hussein, it appears that Gadhafi is willing to make changes which might protect his regime.

To end sanctions placed on Libya since the infamous Lockerbie bombing, Gaddafi is to pay a compensation package. “It’s not compensation. It’s a price,” claims Gaddafi. The ‘price’ for acceptance in the world community. It now seems that part of this ‘price’ is open disarmament.

True to form, the timing of Gaddafi’s announcement to disarm was impeccable – it came just two days before the 15th anniversary of the Lockerbie bombing. He has also dropped Libya’s compensation claims for America’s 1986 bombing. But Libya is currently facing its own economic failure and reform is necessary.

Gaddafi’s unique blend of socialist/Islamic thought is not working in the nation’s best interest. “Our public sector has proven to be sluggish, sometimes even corrupt,” states P.M. Shukri Ghanem. He hopes to privatise large sections of the economy in order to speed economic growth.

But the key to Libya’s success in securing positive international acceptance lies in its vast, unexplored oil fields. ,”American companies will stampede in” states Tarek Hassan Beck. But some Libyans are cynical about the reforms. If external pressure is removed from Libya then the regime will be strengthened. And for some this does not bode well for the people. “Gaddafi will feel that he’s secure with the West and he’s going to be free to be even more oppressive with his own people.”

A bodyguard – who worked for one of Gaddafi’s sons – has told Sky’s Chief Correspondent, Stuart Ramsay, that he saw Gaddafi on Friday along with his daughter. The 17-year-old said he was last seen in a convoy heading south towards Sabha.

Candid Camera Classics
What if a cleaner left town and took all the clothes with him? Peter plays the new owner.
Part 1