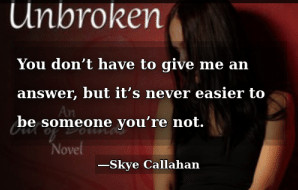 Unbroken: not interrupted or disturbed; continuous.

‘a night of sleep unbroken by nightmares’

I don’t think people actually understand how much courage this guy has. Trust me, if you are willing to meet up face to face with the DAUGHTER OF THE MAN YOU KILLED, you’ve got some guts. Of course, the woman deserves some recognition too, I mean, she was face to face with the very person who killed her father, yet she didn’t rage the way most people would, even I wouldn’t be as calm as her.

2 The little angel of Colombia

Best Documentary
The first time our teams met him, in 1991, Alvero was nine years old. He took care of the old people of Bucaramanga. He washed them, gave them food, gave them love. Ten years later, we found him again. He has founded an old people’s citadel where he welcomes all the old ones of the city who have been abandoned, making their last days happy ones. –

Second or third children born illegally during China’s One Child Policy are banned from marrying, having children or simply boarding a train. Condemned to a non-life, these ghost children do not officially exist according to the Chinese state. ARTE Reportage goes in search of these ‘Haihaizi’, those children who should not have been born.

ARTE Documentary is here to tell you more about what’s going on in the world of culture, news and current affairs with powerful, refreshing and entertaining docs subtitled in English for our international fans.

Real Stories
This documentary chronicles the experiences of mothers who represent three distinct aspects of the story: A Chinese mother who abandoned her baby; a white, middle-class North American mother who adopted a Chinese girl; and a Canadian mother preparing to pick up her baby from China. Each one of these mothers shares her experiences and struggles reconciling the powerful emotions and ideas that both abandonment and adoption, from an alien culture, entail.
Their stories come together into a seamless exploration of the universal themes of mother and child, longing and belonging, culture and identity. These women are bound together, not necessarily by blood, but by their inevitable and perhaps endless search for one another.

Unreported World
40 years to find my family: Krishnan Guru-Murthy went to Cambodia in 2015 to meet two sisters who were about to be reunited after 35 years apart. They were separated as children during the brutal communist regime of the Khmer Rouge in which a quarter of the whole population was killed.
Now a team of young people are harnessing the power of the media to help those searching for family separated by genocide, reunited by reality TV.
This episode first aired on 24/4/2015.

Just For Laughs Gags
Injured man in wheelchair asks someone to throw a coin in the fountain for him and is miraculously cured! A presentation of the Just For Laughs Gags. The funny hidden camera pranks show for the whole family. Juste pour rire les gags, l’émission de caméra caché la plus comique de la télé!