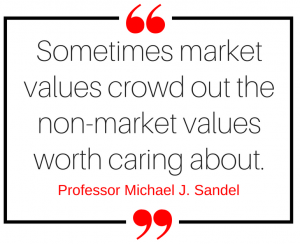 On 8th May 2013, Prospect hosted a conversation between the philosophers Michael Sandel and AC Grayling at the Royal Geographical Society in London.
The discussion spanned a wide range of subjects, including the relationship between markets and morality, justice, and the future of education.

On 8th May 2013, Prospect hosted an evening with Michael Sandel and AC Grayling at the Royal Geographical Society in London.
After their conversation, Sandel engaged the audience in one of his trademark Socratic dialogues. The Canadian government has long made an exception to its ban on walrus hunting for the country’s Inuit population. Should the Inuits be able to sell on their hunting privileges to wealthy tourists?

For the final part of Prospect’s event with Michael Sandel and AC Grayling, Sandel took questions from the audience. He was asked about subjects including tax avoidance, the financial crash, and equality.
Watch Sandel’s conversation with Grayling here: http://youtu.be/ea787aGCuK0
Watch Sandel’s Socratic dialogue with the audience on walrus hunting: http://youtu.be/4i-jYPMDUgc
For more ideas to live by, go to the Prospect website: http://www.prospectmagazine.co.uk/

4 Michael Sandel: Leadership and Ethics in the 21st Century lecture in Taiwan

During the Civil War, Congress passed a law that provided for a draft by lottery. But if you didn’t want to serve, you could pay a substitute to take your place. Sandel asks, Is that system ethical? This event took place at the Carnegie Council on November 19, 2009. For complete audio, and transcript, go to: http://www.carnegiecouncil.org/resour…

6 The Ethical Use of Biotechnology: Debating the Science of Perfecting Humans

Michael Sandel, the Anne T. and Robert M. Bass Professor of Government at Harvard University, and Peter Singer, the Ira W. DeCamp Professor of Bioethics at the University Center for Human Values at Princeton University, opened the 2008-09 Amherst College Colloquium Series (ACCS) with a lecture titled The Ethical Use of Biotechnology: Debating the Science of Perfecting Humans

7 Public Service and the Future of Democracy

Gepubliceerd op 15 aug. 2015
In association with The John Smith Centre for Public Service at University of Glasgow and Carnegie UK Trust

Hailed as the most popular political philosopher of his generation and a legend in the lecture hall who regularly draws audiences of thousands, Professor Michael J Sandel will give a keynote speech on the subject of Public Service and the Future of Democracy followed by a question and answer session chaired by the Presiding Officer.

The Harvard professor is one of the best known American public intellectuals. His Harvard lectures fascinate students eager to discuss the big questions of modern political life: bioethics, torture, rights versus responsibilities, the value we put on things. He is famed for his course ‘Justice’, which he has delivered for two decades and is now available as a 12-part TV series with companion website and book: ‘Justice: What’s the Right Thing to Do?’ In his newest book, ‘What Money Can’t Buy’, he challenges the idea that markets are morally neutral.

His on-going series ‘The Public Philosopher’ can be heard on BBC Radio 4, which also broadcast his Reith Lectures in 2009. His programme ‘Justice: A Citizen’s Guide to the 21st Century’ was seen on BBC Four, and he has taken his electrifying lectures on a global tour across five continents to great acclaim. In 2010, China Newsweek named him the “most influential foreign figure of the year” in China.

“His desire to pay testament to all shades of opinion is what transforms his lectures from an intellectual presentation into a civic event. If politics often leaves us feeling bad, Sandel is a political philosopher who makes us think about what it means to be good.” The Observer

Gepubliceerd op 30 mrt. 2010
When is an Open Society also a Just Society?
Highlights of the Discussion:
George Soros
Founder and Chairman of the Open Society Institute
Michael J. Sandel
Anne T. and Robert M. Bass Professor of Government at Harvard

Gepubliceerd op 12 apr. 2012
Listen to this audiobook excerpt and hear Michael J. Sandel read from his book Justice: What’s the Right Thing to Do? What are our obligations to others as people in a free society? Should government tax the rich to help the poor? Is the free market fair? Is it sometimes wrong to tell the truth? Is killing sometimes morally required? Is it possible, or desirable, to legislate morality? Do individual rights and the common good conflict?

These questions are at the core of our public life today—and at the heart of Justice, in which Michael J. Sandel shows how a surer grasp of moral philosophy can help us to make sense of politics, morality, and our own convictions as well.

Sandel’s legendary Justice course is one of the most popular and influential at Harvard. Justice offers listeners the same exhilarating journey that captivates Harvard students—the challenge of thinking our way through the hard moral challenges we confront as citizens.

Read more about the book Justice at http://us.macmillan.com/justice-2/Mic…

Find out more about author Michael J. Sandel at http://us.macmillan.com/author/michae…

11 MetroFocus Web Extra | Michael Sandel on the Justice of Education

Is civic debate really dead? Across the world, students are engaging with Michael Sandel’s seminars on markets and morals.

Are there legitimate grounds for discrimination in the business world? This episode explores the hiring practices of Abercrombie & Fitch, Hooters, and even OBGYNs. Is it okay to hire attractive sales clerks and flight attendants, or is “lookism” comparable to racism and sexism. Larry Summers thinks our workplace must reflect society’s commitment to civil rights, but has no problem with “the Boston Celtics hiring tall people.” Robert Barro goes further, suggesting that physical attractiveness, like intelligence, is a legitimate basis for discrimination.

www.makomisrael.org Professor Michael Sandel “The Law of Return and the Right of Return” Jerusalem June 25th, 2012 Global Jewish Forum: A Free People In Our Land? Exploring Liberalism and Zionism Designed and presented by Makom

The RSA
Decades of increasing inequality, globalisation, technological change, unfettered markets and technocratic politics have given rise to ever more polarisation and populist sentiment. How do we gain a better, wiser politics in the context of these 21st century challenges? Can the progressive parties reconcile the concerns of the disenfranchised and angry without succumbing to xenophobia and anti-outsider sentiment? What are the new ideas and solutions that will help us?Renowned political philosopher Michael Sandel delivers an exclusive address on the future of democracy and our place within it.

19 We Discovered The Secret To Immortality!!!

Just For Laughs Gags
If you’re not on board with this, we suggest sticking with a healthy diet and exercise regime!
Welcome to the world-famous Just for Laughs Gags, we’ve been playing silly pranks on unsuspecting people in public and capturing hilarious reactions with hidden cameras.