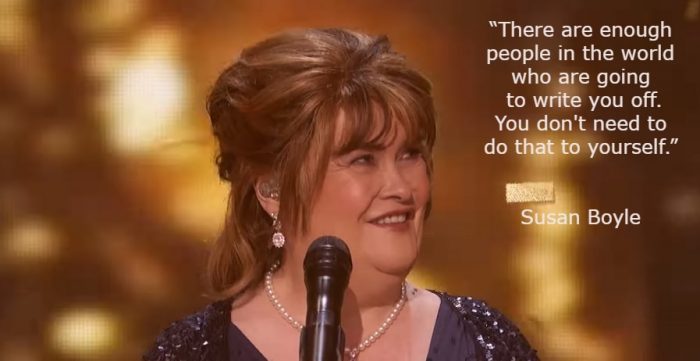 The point at which a situation is clearly seen to start to change:

The end of the Cold War was a defining moment for the world in more ways than one.

You can’t judge a book by its cover

Never Judge A Book by Its Cover

It comes from the idea that you may see the cover of a book and decide it’s not a good book or it’s not worth reading without knowing anything else about it. It is used metaphorically when it is applied to other things such as a TV show, a person, a job, or a restaurant.

Here are some examples of how it is used:

Jim: Wow, you really want to go to a restaurant called ‘Plain Burger’?

Joe: Hey, never judge a book by its cover! They may have delicious burgers!
Shawn: Look at those scrawny kids on the other team. This game should be easy for us to win.

John: Don’t judge a book by its cover. They might be faster than us. We won’t know until we play.

Britain’s Got Talent judge Simon Cowell reflects on Susan Boyle’s outstanding year from BGT conant to one of the most famous singers in the world.

5 The Susan Boyle ~ Les Misérables Story… where it all began

Back on April 2009, Susan Boyle stepped out (broadcasted) on Britain’s Got Talent stage for her first audition, and electrified the world with her stunning version of “I Dreamed a Dream” from the successful stage musical “Les Misérables”.

This is a compilation of videos dating back to 2009-2012 where Les Misérables composer Claude-Michel Schonberg, lyricist Alain Boublil, and Producer Sir Cameron Mackintosh were moved and compelled to exalt Susan for embracing “I Dreamed a Dream” as a personal quest to tell her story of deep, emotional and painful memories.

This video also ties the stage musical about Susan’s life which has the same song title (IDAD), and was written and produced in the UK. This was created with great love and respect for what Susan endured during her difficult birth, bullying in her formative years, and her personal relationships with her family and friends in the small village of Blackburn, West Lothian, Scotland. This musical has a good mix of period music through the years, adding in touching/tearful moments and laughter. Also, duly noted in the musical was the blatant and gross abuse by the media press towards Susan and how she coped in the end and survived…

During the Spring and Fall of 2012, this successful stage musical had garnered many 4-5 star ratings in the UK, and has bookings set for Australia next spring 2013.

Hopefully, one day the “I Dreamed a Dream” stage musical will showcase in New York, Los Angeles, London, San Francisco, etc. because her story has moved many people in the world through her voice, and empathized with her adverse and triumphant story. No one deserves as much success as someone who’s humble, kind, generous and self-determined as Susan… and, in her own way, for someone who has survived years of emotional and psychological abuse.

It must also be noted … many have made thousands/millions of $… and, careers launched and made off the toil and tears… and, of course life-changing joy of a humble and shy, middle-aged lady from Blackburn, Scotland. Her presence was and will be felt wide and deep for many years to come.

Click on HD for best quality.
Susan Boyle’s Semi Final Performance on 24 May 2009.

Susan’s New Album – “The Gift”
Susan’s performance of ‘Wild Horses’ at the finale of NBCs hit summer series America’s Got Talent! Go to http://www.susanboylemusic.com for the latest news and features on Susan’s official website.

To order the stunning new album Someone To Watch Over Me

SUSAN BOYLE, the Scottish singing sensation who rose to international fame as a contestant on Britain’s Got Talent in 2009 on her art, life and Catholic faith as she embarks on her first US concert tour.

Susan Boyle is BACK! Susan returns with “Wild Horses” by The Rolling Stones and earns the golden buzzer from Mel B.

Susan Boyle was 48 years old when she took to the stage to perform a spine-tingling rendition of ‘I Dreamed a Dream’ on Britain’s Got Talent. Ten years ago, after living her whole life in a small Scottish town, Boyle was thrust into the spotlight — and it quickly became too much for her.Get more A Current Affair at: http://9Now.com.au/ACA

20 The Stunning Transformation Of Susan Boyle

After her star-making appearance on Britain’s Got Talent, Susan Boyle secured a place in all of our hearts. But her path to fame wasn’t an easy one. If you’re curious about her early life and how she got to where she is today, keep watching to witness her stunning transformation.

Boyle was born in 1961 in Blackburn, Scotland to Patrick and Bridget Boyle, a miner and a typist, respectively. She was the youngest of nine siblings, and her mother was 47 when she gave birth to her.

Due to a difficult birth, Boyle experienced a lack of oxygen as an infant, resulting in a condition that at the time was thought to be mild brain damage. As a result, she grew up with some learning challenges and became the target of bullying in school. Despite her childhood hardships, she’s characterized herself as a “cheeky little girl” who fought very hard to carve out a space of her own among her siblings.

With her mother’s unwavering support, Boyle found her way to singing just before her teenage years. She discovered her iconic talent by participating in school productions and performing with her church choir.

But for much of Boyle’s early life, singing was merely an activity that she did for pleasure, not a skill that could lead to a career.