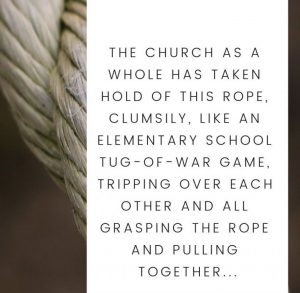 There was a constant tug-of-war between the military and the president.

Examples from the Corpus

• Two people pulling in opposite directions have a tug-of-war.
• Rather, what seems to be happening is a tug-of-war over where exactly the bipartisan centre stands.
• Often, several make contact with the wall and then there is a tug-of-war between them.
• She heard the break before she actually saw the child who had fallen at the winning end of a tug-of-war rope.
• The children are trapped in an emotional tug-of-war between their parents.
• They have intricate games of tug-of-war with anything long enough to pull.
• Opposing forces were in precarious balance, and resolving their tug-of-war was his prime concern.