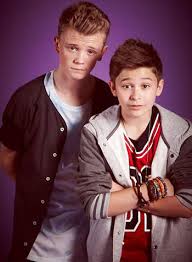 Bars and Melody (also known as BAM) are a British singing/rapping duo consisting of rapper Leondre Devries (“Bars”) and singer Charlie Lenehan (“Melody”). They took part in the eighth series of Britain’s Got Talent in 2014. During their audition, they had automatically been entered into the semi-finals of Britain’s Got Talent after the head judge Simon Cowell pressed the “golden buzzer”, a new feature introduced in the eighth series, and finished in third place.

After the show, Bars and Melody signed a record deal with Syco Music. Their debut single “Hopeful” was released on 25 July 2014. Also five days later, they brought out a new single “Shining Star” (30 July 2014), this was an extra to their acoustic version of “Hopeful”. They refer to their fans as “Bambinos”.

Devries and Lenehan first met in September 2013 on Facebook, after Devries had seen Lenehan’s solo performances.
They first met each other in person in January 2014 and decided to form a music duo as Bars and Melody, or B.A.M.

On 8 February 2014, Bars and Melody auditioned in Manchester for the eighth series of Britain’s Got Talent. They performed a song based on Twista and Faith Evans’ “Hope”, with Devries replacing the original verses with ones protesting against bullying. After the audition, the audience began chanting “Push the gold!” and Simon Cowell responded by pressing the golden buzzer, sending them through straight through to the live semi-finals. Their audition has since been viewed on YouTube more than 77 million times.

Before the semi-finals, the boys were interviewed on The Ellen DeGeneres Show in the United States, and numerous adverts were posted on Facebook. They advertised Britain’s Got Talent and themselves, as well as performing their audition piece. In the BGT semi-final on 29 May, they performed Puff Daddy and Faith Evans’ “I’ll Be Missing You”, coupled with new verses about someone who had recently lost a friend; audience members having been given candles to wave during their performance. They won their semi-final and progressed through to the final.

In the final, they performed the song they sang in their first audition and ultimately finished third behind Lucy Kay and Collabro.

Despite not winning, it was reported that Bars and Melody were set to sign a £500,000 record deal. On 15 June 2014, it was announced that Bars and Melody had signed an initial one-single deal with Simon Cowell’s record label, Syco. The music video of their song “Hopeful” was released on YouTube on 7 July 2014. Their debut single was released on 27 July 2014 and went straight to number five on the UK Singles Chart. To promote the song, they appeared on television shows such as This Morning and Good Morning Britain as well as The Official Chart on BBC Radio 1.

Bars and Melody also participated in their first HMV signing tour. They also released the single “Shining Star”, which came out as part of Hopeful Acoustic. In 2015, B.A.M released a new single called “Keep Smiling”; it was released on 16 February 2015 and peaked at 52 in the Official Charts Company. The duo went on their debut headline tour, the ‘Stay Strong Tour’, in March/April 2015 to preview songs from their album. Their third official single “Stay Strong” coincided with the tour and was released alongside a music video on 6 April 2015. Two physical editions of the CD could be purchased with each one containing an image of either Charlie or Leondre. They also participated in a second HMV signing tour for promotion. The boys confirmed the release of their debut album 143 for 21 August 2015 followed in November by a second headline tour – the 143 Album Tour. This tour, which will be Bars and Melody’s first outside of the UK, features scheduled dates in Poland and the Netherlands.
As of 26 April 2015, Devries and Lenehan are presenters on the CBBC show Friday Download.

Charlie Lenehan
Charlie-Joe Lenehan-Green (born 27 October 1998) is from Frampton Cotterell, Bristol, England. He lives in Bournemouth with his mother, Karen and his younger sister, Brooke. Lenehan first took to the stage at the age of 11 after starting at The Ridings’ Federation Winterbourne International Academy. He was taking part in the school’s Rock Island Project, and after forming a band with his schoolmates, was chosen as the singer. It was following this – and during parents’ evening – his teachers commented on his talent. According to his mother Karen, a teacher came up to her on parents’ evening and asked, “Have you heard your Charlie sing? He’s really good.” This comment really surprised her, as no one in the family had ever been a singer. After unearthing his hidden talent, his grandfather, Dennis, bought him a microphone and speakers. Lenehan, who also writes his own music, later put up videos of himself singing on Facebook and YouTube, some of which attracted 50,000 hits – and was contacted by Devries, who was impressed with his work. The pair started chatting and in January started to meet up and practice together.

Leondre Devries
Leondre Antonio Devries (born 6 October 2000) is from Port Talbot, Neath Port Talbot, Wales. He attends the Glan Afan Comprehensive School. Devries lives with his mother Victoria. He has two older brothers, Ben and Joseph was part of the boyband “Overload Generation” who participated in the eleventh series of UK’s The X Factor and he also has a younger sister Tilly. Devries is extremely close to his 4 cousins, Jess, Ellie, Daisy and Erin. Leondre Devries has spoken openly about his experiences of bullying at a young age.

Previously he was rapping solo under the stage name ‘Little Dre’.

Leondre Devries: “People who feel alone and scared, they have no way out, so we need to show them the way; and we want to be the voice for the children with no voice.”

Bars and Melody—rapper Leondre and singer Charlie Lenhan—chatting on Australian morning kids’ TV show Studio 3, during their November 2014 visit to that country as part of their anti-bullying campaign.

Bars and Melody give the CUTEST interview ever! Britain’s Got Talent

Leondre Devries: “We want to speak out to the world. There’s children starving, there’s children being bullied, depressed, don’t know what to do with their lives, and just to help and make a change in the world would be amazing. And even if I don’t change the world, I might spark the one that does.” Bars and Melody—Leondre Devries and Charlie Lenehan—talk about their anti-bullying campaign, their roles as Anti-Bullying Ambassadors and their appearance in the Britain’s Got Talent final. — Bars and Melody are Leondre Devries and Charlie Lenehan, a rapping and singing duo who were Britain’s Got Talent 2014 finalists. After the show, Bars and Melody were signed by Simon Cowell. Their début, anti-bullying single Hopeful came out in July 2014, and their second single, Keep Smiling, was released 16 February 2015. Leo and Charlie’s next new song, Stay Strong, is planned for April.

Bars and Melody announce NEW SINGLE: I.L.Y. (I Love You)

Leondre Devries and Charlie Lenehan—Bars and Melody—join Marvin, Rochelle and Phil, making pizza in the This Morning kitchen.

MY FIRST KISS?! INTIMATE Q & A

Bars and Melody – Live Your Life

Here it is! Our new music video for ‘Live Your Life’… This song is all about staying positive, being happy and making sure that nobody can take away your smile 🙂

This is the start of our weekly VLOGs and to celebrate we’re doing an awesome giveaway!

I guess Leondré is 11 years on this video, two years before his performance in Britain got talent

NotJustTWO
Gepubliceerd op 2 okt. 2014
Leondre Devries: “All the little kids being stopped having fun, I feel this anger right inside, and I just want to use my words and power to target bullying and stop it. I know I can’t stop it altogether, but it’s just that’s my target, and I really want to stamp it out because it makes me really angry.”

Before he was “Bars” in Bars and Melody, Leo was “Little Dre”, and in this interview with ITV Wales from November 2012, Leondre and his brother Joseph—now better known as Joey from X Factor boyband Overload—talk about bullying and their campaign, using their singing and rapping, to fight back against it and to support those who are experiencing bullying.

The song Just Believe, which features in this video, was written by Leondre and Joseph, and dedicated to their brother Santino, who died very young. It is available on iTunes: https://itun.es/i6gy9HN.

The official Just Believe video can be seen in full at http://youtu.be/_hrQwrIxEcg.

Bars and Melody are Leondre Devries and Charlie Lenehan, a rapping and singing duo who were Britain’s Got Talent 2014 finalists.

After the show, Bars and Melody were signed by Simon Cowell. Their début, anti-bullying single Hopeful came out in July 2014, their second single, Keep Smiling, in February 2015 and Stay Strong was released in April.

Brodie Forster
Gepubliceerd op 17 jan. 2017
Inspired by my last Hopeful Bars and Melody comparison video which now has reached 100,000 views! I decided to try and up my game with this cheeky emotional roller coaster… I like Bars and Melody and although the majority of the comments I get have let me know 2014 was their favourite Bars and Melody era I like them now more than I ever have and it’s been interesting watching them grow into little emos.

Bro….What happened to your hair?

Hey guy’s, Here’s another vlog from our UK tour , we had an amazing time on the Generation Z tour. We want to do it all again!

Wembley Arena with 12,500 seats, it is London’s second-largest indoor arena after The O2, and the eighth-largest in the UK.

I hope some night you’ll be reading off this page
Can you hear me in the street light breathing out your name?
A dark emotion left me broken tied around my head
Tied so tight there’s not a feeling left
Maybe I should leave to reach a state of inner peace
I know it is hard understanding you and me
Our family is broken
Our family is gone
I’m writing this letter to tell you I can’t carry on
By the time we meet again it may not be me my friend
I’ll be someone else
Heart so shattered the I can hardly sleep
The only time I see your face is invested in a dream
I try to forget you inside I am torn
Although you are heartbroken I am heartbroken more

Maybe I can open up and tell you what is on my mind?
Better things are coming I don’t want to bring you down this time
In a room that’s adjacent I felt the soft placement of your palms on the wall
Your nails trace a new life
Somewhere outside this bitter tasting home
Where we can forget this life and it’s amplifying tone
Is this where I belong? Is this the right path?
I wish that I could stay but I’m not coming back
By the time we meet again it may not be me my friend
I’ll be someone else
There is no way to take back my actions
Everything is marred smeared into the blackness
The deadness of the wind and the whispering moon
If there is a heaven I mill see you there soon

When someone you love gets taken away
You can’t excess the pain
It’s your darkest day
People dying son, daughters, wives
We’re in this together
What born ones like
It doesn’t mean that you don’t show love
Send me a blessing from heaven above
Give anything to hear half your breath
I know your still livin’ your life after death

When you went away
What a life to take
What a bond to break
I’ll be missing you
Yeah
Stop the hate!

These two kids are great. The little one writes some amazing lyrics for someone his age.

These two kids are great. The little one writes some amazing lyrics for someone his age.