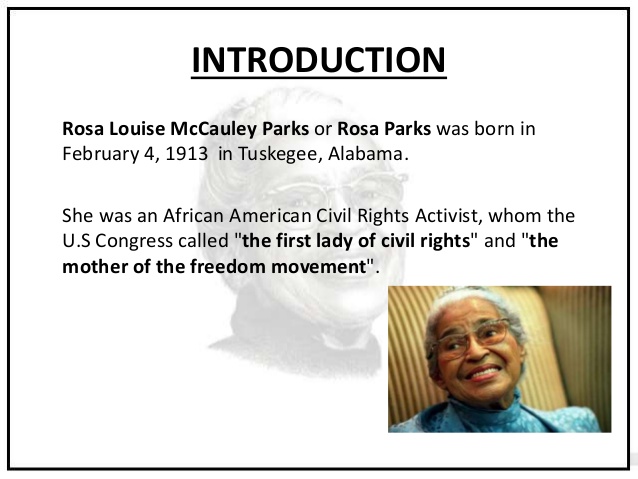 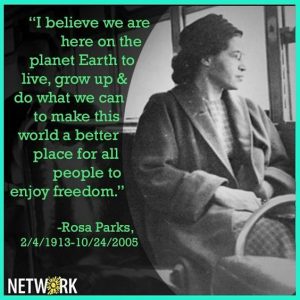 PBS NewsHour
A statue of civil rights icon Rosa Parks was unveiled in the U.S. Capitol’s Statuary Hall. Parks was the first woman and only the second African-American to lie in state in the rotunda after she died in 2005. Gwen Ifill reports on the ceremony.

Rosa Parks, the “Mother of the Civil Rights Movement” was one of the most important citizens of the 20th century. Mrs. Parks was a seamstress in Montgomery, Alabama when, in December of 1955, she refused to give up her seat on a city bus to a white passenger. The bus driver had her arrested. She was tried and convicted of violating a local ordinance. Check out our Patreon rewards! https://www.patreon.com/Manufacturing…
Her act sparked a citywide boycott of the bus system by blacks that lasted more than a year. The boycott raised an unknown clergyman named Martin Luther King, Jr., to national prominence and resulted in the U.S. Supreme Court decision outlawing segregation on city buses. Over the next four decades, she helped make her fellow Americans aware of the history of the civil rights struggle. This pioneer in the struggle for racial equality was the recipient of innumerable honors, including the Martin Luther King Jr. Nonviolent Peace Prize and the Presidential Medal of Freedom. Her example remains an inspiration to freedom-loving people everywhere.

The Obama White House
President Obama speaks at a ceremony dedicating a statue in honor of Rosa Parks at the U.S. Capitol. February 27, 2013. 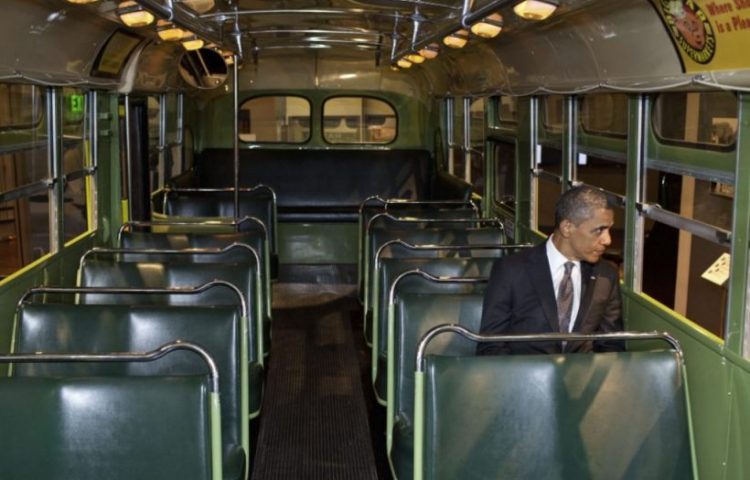 Rosa Parks receiving the 1993 Essence Award. She is introduced by Eddie Murphy, honored by Robert Kennedy, Jr. and then entertained by Kathleen Battle. Elaine Steele, the co-founder of the Rosa & Raymond Parks Institute can also be seen in the footage sitting next to Mrs. Parks.
4′

One of the many speaker on that most rememberable day was then Senator Barak Obama. As, we approach the now President-Elect Barak Obama, we remember our Black/American history.

Former CNN host Larry King talks to Rosa Parks about her famous refusal to give up her seat on a bus to a white man.

Did you know Rosa Parks wasn’t the first African-American woman to refuse to give up her seat? Get the full story. #HistoryChannel

9 A Tour of the Rosa Parks Museum

Abby speaks with Howard University Professor, Wilmer Leon, about the anniversary of Rosa Parks’ refusal to give up her seat for white passengers on a Montgomery, Alabama bus and what you haven’t heard about the story.

Rev.Dr.Joseph Lowery speaks of At home going service of the late Great MS.Rosa Parks and her Great,Great legacy…

Civil rights activist Rosa Parks (February 4, 1913 to October 24, 2005) refused to surrender her seat to a white passenger on a segregated Montgomery, Alabama bus, which spurred on the 381-day Montgomery Bus Boycott that helped launch nationwide efforts to end segregation of public facilities. The city of Montgomery had no choice but to lift the law requiring segregation on public buses. Rosa Parks received many accolades during her lifetime, including the NAACP’s highest award. #Biography Subscribe for more Biography: http://aetv.us/2AsWMPH Delve deeper into Biography on our site: http://www.biography.com Follow Biography for more surprising stories from fascinating lives: Facebook – https://www.facebook.com/Biography Instagram – https://www.instagram.com/biography Twitter – https://twitter.com/biography Biography.com captures the most gripping, surprising, and fascinating stories about famous people: The biggest break. The defining opportunity. The most shattering failure. The unexpected connection. The decision that changed everything. With over 7,000 biographies and daily features that highlight newsworthy and compelling points-of-view, we are the digital source for true stories about people that matter. Rosa Parks – Civil Rights Activist | Mini Bio | BIO https://www.youtube.com/user/Biograph…

United States Courts
December 1st is the anniversary of Rosa Parks’ refusal in 1955 to give up her seat on a segregated city bus in Montgomery, AL. Along with Thurgood Marshall and other luminaries, Rosa Parks is considered a hero of the Civil Rights Movement. However, it was four unknown women — two teenagers and two women with families — also forced off city buses, who quietly made legal history. Their landmark Supreme Court case Browder v. Gayle made segregation on public transportation unconstitutional.

15 From “The Rosa Parks Story: “Arrested”

Hi Friends:
As you know, I enjoy sharing inspirational quotes with you, from all kinds of different sources. I had originally planned, this week, to feature quotes from Rosa Parks, and may yet, at a later time.

For now, the quote which comes to mind is something I heard Deepak Chopra say, as part of an introduction, before he conducted an interview with Rosa Parks. He remembered, as a boy, growing up in India, one morning his father burst into the dining room during breakfast, clutching a newspaper. His father’s short, simple statement was something which stayed with him, and I’m sure greatly influenced him: “There’s a new Gandhi! In the United States!” The newspaper carried the story we have all come to know … about quiet strength … resolve … and peaceful demonstration …
I am proud that one of my favorite posts, and still one of the most viewed, is the “Rev. Dr. Martin Luther King, Jr. Quote Collection” we featured back on January 21, 2013. Here’s a link to that post:
http://pastorappreciationblog.com/?s=…​

Our sharing of the book “Martin’s Big Words” (which will be right under the “Quotes” post if you go there) is still our most watched video here on our YouTube Channel.
In researching the Rosa Parks story, as I wanted to do a special lesson at school about Rosa Parks, I read many books, and viewed countless videos. I’d like to share my favorite two of those videos with you today. I also used the moment to teach what a “biography” is. I explained that I love to read biographies because I want to read about great people who have done great things … because it inspires me …encourages me … to try to do great things. I am proud that “my kids” know who Rosa Parks is, and who Rev. Martin Luther King, Jr. is. What they did … and, why they did it. I think I am just as proud to know that for myself.
The first video is a clip from the movie, “The Rosa Parks Story.” “The Rosa Parks Story” aired on CBS Television on February 24, 2002. Please note this movie is still available for purchase today on Amazon, etc. The script was written by Paris Qualles, and the movie was directed by Julie Dash. Angela Bassett performed a remarkable portrayal of Rosa Parks. You may also recall that Cicely Tyson played Rosa’s mother. This is one of the most dramatic moments I’ve experienced from the screen. I wasn’t sure if I should feature this, “The Arrest Scene,” but I got my answer today. I saw elementary students held, motionless, in awe of what they were watching. They are too young to understand all of the story … but, as the scene developed … I heard children, quietly, gasping … “Get up, Rosa … Rosa, stand up …” Again, all they knew was that they were drawn to this “Rosa Parks,” and, in their innocent, loving way … they didn’t want to see her get into trouble …
In explaining the benefits of a biography, I explained how, when reading (or viewing a biography, as a movie or documentary can also be a biography) we stand in the subject’s shoes, in their place … we find ourselves experiencing what they experienced … we feel what they are feeling … Can you imagine being on that bus … in December, 1955?
Here we are able to “get on that bus” with Rosa Parks, in the “Arrest Scene” from “The Rosa Parks Story”

16 I Am Rosa Parks – Read Along w/ Words on Screen

Support the author by purchasing the book here: http://amzn.to/2ER727m​

Watch, listen and read aloud to learn about America’s “First Lady of Civil Rights.” Rosa Parks was an extraordinary citizen who changed the world. Written by Brad Meltzer with illustrations by Christopher Eliopoulos. Read Aloud for Children read by Mrs. Clark.

Absolute History
On December 1, 1955, in Montgomery, Alabama, Rosa Parks rejected the bus driver’s order to give up her seat in the coloured section to a white passenger, after the whites-only section was filled. Parks’ prominence in the community and her willingness to become a controversial figure inspired the black community to boycott the Montgomery buses for over a year, the first major direct action campaign of the post-war civil rights movement.

Learn about the life of civil rights activist Rosa Parks— her work with the NAACP, bus boycotts, and her lifelong fight against racial inequality.

Throughout her life, Rosa Parks repeatedly challenged racial violence and the prejudiced systems protecting its perpetrators. Her refusal to move to the back of a segregated bus ignited a boycott that lasted 381 days and helped transform civil rights activism into a national movement. But this work came at an enormous risk— and a personal price. Riché D. Richardson details the life of Rosa Parks.

Black history taught in US schools is often watered-down, riddled with inaccuracies and stripped of its context and rich, full-bodied historical figures. Equipped with the real story of Rosa Parks, professor David Ikard highlights how making the realities of race more benign and digestible harms us all — and emphasizes the power and importance of historical accuracy.

The TED Talks channel features the best talks and performances from the TED Conference, where the world’s leading thinkers and doers give the talk of their lives in 18 minutes (or less). Look for talks on Technology, Entertainment and Design — plus science, business, global issues, the arts and more. You’re welcome to link to or embed these videos, forward them to others and share these ideas with people you know. For more information on using TED for commercial purposes (e.g. employee learning, in a film or online course), submit a Media Request here: http://media-requests.TED.com

Just For Laughs Gags
A sexy girl asks random men to help push her car, obviously they all jump at the occasion to look all manly and full of good intentions. Unfortunately, it turns out the woman’s car is some sort of evil bastard child between Herbie and KITT. It’s out there looking to get his revenge on the human kind by driving around and running over all humans.
A presentation of JustForLaughsTV, the official Just For Laughs Gags YouTube channel. Home of the funniest, greatest, most amazing, most hilarious, win filled, comedy galore, hidden camera pranks in the world!