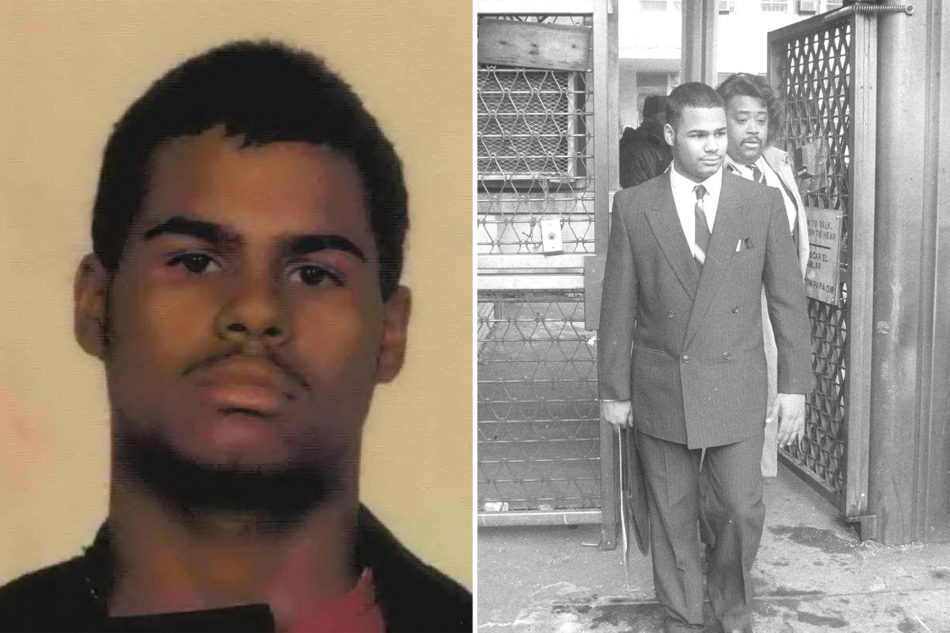 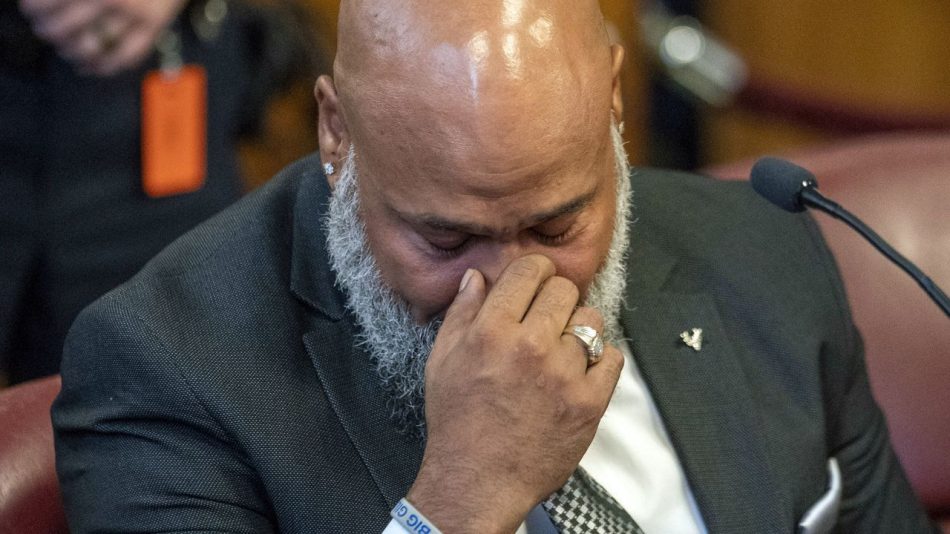 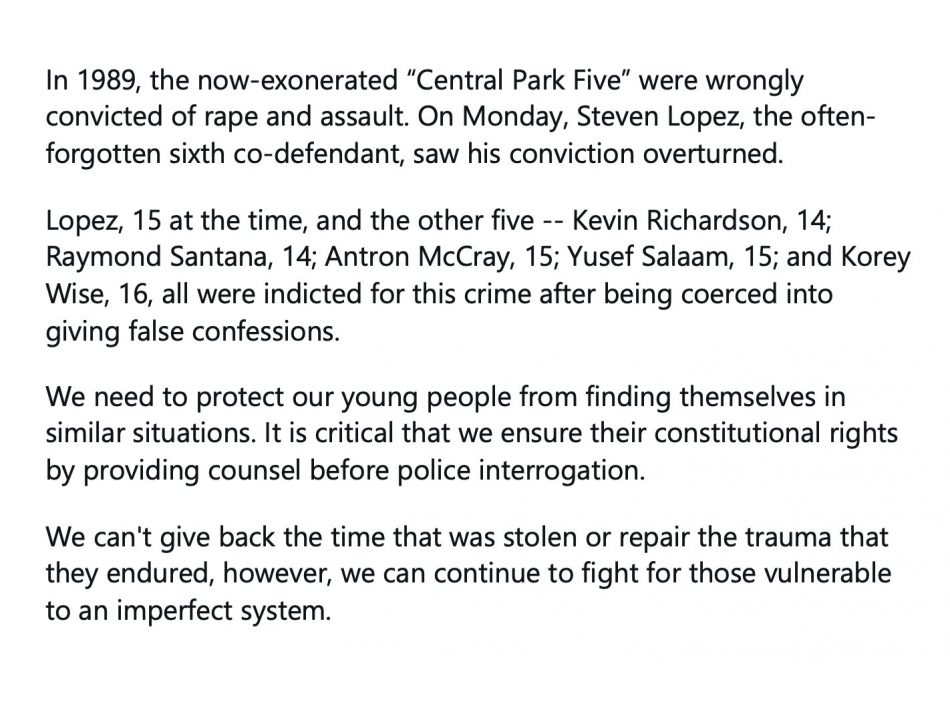 FOX 5 New York
A judge tossed the conviction of Steven Lopez, who was arrested with five other Black and Latino teenagers in the 1989 attack on Trisha Meili.

CBS New York
The five men convicted in the case were exonerated, and Monday a sixth person linked to the crime had his charges overturned, CBS2’s Kevin Rincon reports.
English
Dutch
English

We vacated the guilty plea and dismissed the indictment against Steven Lopez, one of the teenagers charged in the 1989 Central Park jogger case. A conviction based on an unconstitutional plea cannot stand. Mr. Lopez was just 15 when he was charged with robbery and rape in the face of false evidence and testimony, unreliable forensic analysis and immense external pressure.
Nobody should ever have to endure a wrongful conviction, and we hope that today is another step towards justice and healing for Mr. Lopez. Unjust convictions undermine public safety. Not only do we fail to ensure accountability, it prevents law enforcement from effectively doing their jobs. We will continue to conduct these reinvestigations, which are essential for equal justice under the law.

Eyewitness News ABC7NY
A co-defendant of the so-called Central Park Five has had his conviction on a related charge overturned. Michelle Charlesworth has the breaking details.

New York Post
A previously forgotten sixth co-defendant in the infamous Central Park Five rape case wept openly in a Manhattan courtroom Monday as his more than three decade-old conviction was overturned.
Steven Lopez, 48, who as a teenager pleaded guilty to a lesser charge of robbing a male jogger, was cleared after Manhattan District Attorney Alvin Bragg and his attorneys filed a motion to vacate the conviction.
“Mr. Lopez was charged and pleaded guilty in the face of false statements, unreliable forensic analysis and immense external pressure,” Bragg told the court.

ABC News
Manhattan District Attorney Alvin Bragg discussed the latest on the Central Park case and why Steven Lopez was overlooked as a defendant and what his exoneration represents.

NBC New York
There was a sixth teenager caught up in the Central Park Five case, and Monday he was back in court to finally get justice.

(25 Jul 2022)
RESTRICTION SUMMARY:
POOL
New York 25 July 2022
1. Close-up of Steven Lopez
2. SOUNDBITE (English) Eric Shapiro Renfroe, Steven Lopez’s attorney:
“But I mostly want to talk to Steve. I believe what happened to you was a profound injustice and an American tragedy. I wasn’t alive when you were arrested, but it is truly painful to see how the system failed you, to see how this city and this nation vilified you when you were just a kid. And worse, you were innocent.”
3. Close of Lopez
4. SOUNDBITE (English) Judge Ellen Biben, New York County Supreme Court AND Seven Lopez, wrongfully convicted: ++PARTIALLY OFF-CAMERA++
BIBEN: “It cannot be said that Mr. Lopez’s guilty plea was predicated on a voluntary and intelligent waiver of his constitutional protections as our Constitution, criminal procedure law, and justice require. As such, the court grants the party’s applicaiton for vacator of judgement and of conviction under CPL-440-10 sub 1. And in addition, the record further establishes that the people would not be able to sustain their burden at trial, and therefore the indictment against Mr. Lopez is now dismissed.”
LOPEZ: “Thank you.”
BIBEN: At this time, I’m signing the order vacating the judgement of conviction and dismissing indictment 4762 of 1989. With respect to Mr. Lopez, the matter will be sealed, except on the request of the parties. We wish you peace and healing.
LOPEZ: “Thank you.”
BIBEN: “It is so ordered.”
5. Pan to Lopez, Lopez hugs attorney
ASSOCIATED PRESS
New York – 25 July 2022
6. SOUNDBITE (English) Alvin Bragg, (D) Manhattan District Attorney:
“Today is an important moment, not just for the DA’s office, but for Manhattan, New York City and the entire criminal justice system. So many largely forgot that there were six who were falsely accused of rape of the Central Park jogger. Today, Mr. Lopez joined the other five who had their convictions vacated. What is so striking to me is how young Mr. Lopez was when both he was arrested and then when he pled guilty under extraordinary pressure. He saw the outcome of two trials, not one, but two trials of the five other teenagers charged before him. He was questioned in the middle of the night. He was implicated by unreliable forensic evidence and by statements. And as many of you will recall, he was up against incredible public scrutiny.”
7. Wide of news conference
8. SOUNDBITE (English) Alvin Bragg, (D) Manhattan District Attorney:
“It is matters like this that hamper that trust and thereby, by extension, our public safety. And it is my hope that today, which is first and foremost as Mr. Lopez Lopez’s day, but also by extension the impact on the perception of our system and by extension, the impact on public safety.”
9. Wide of news conference
10. SOUNDBITE (English) Eric Shapiro Renfroe, Steven Lopez’s attorney:
“What I would say is that, you know, and I don’t know how much he’s comfortable with me saying, but I would say that I couldn’t imagine having gone through this. And I think that he’s, you know, tremendously strong for having endured it. So I’m sure that he’s feeling a range of emotions. But I’m hoping today, at the very least, vindicated, because I think that there were a lot of awful things that were said about him that I know were not true at the time that were said and that were not true today.”
ASSOCIATED PRESS
ARCHIVE: New York – 22 April 1989
ASSOCIATED PRESS
ARCHIVE: New York – 21 April 1989
12. STILL of a police car sitting in an area of Central Park were a woman, who came to be known as the Central Park jogger, was raped, beaten and left for dead two nights earlier.

Just For Laughs Gags
Worker works so slowly that he cemented his foot on the pavement and a man with a steamroller inches very slowly towards him.
Part 1