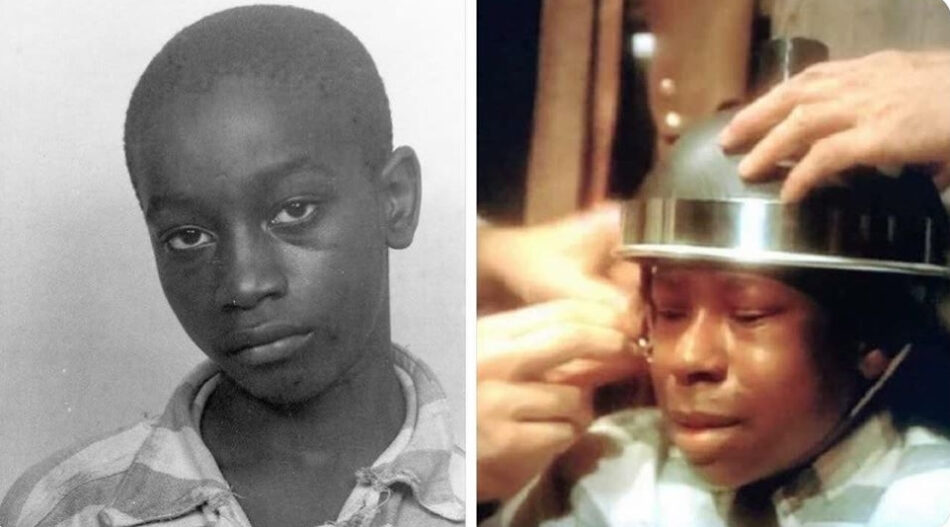 1 The Child in the Electric Chair

George Stinney Jr was so small and puny that executioners struggled to attach his young body to the electric chair.

He was convicted of murder in just 10 minutes, but it took 70 years to prove he was innocent.

As miscarriages of justice go, few cases are as harrowing as that of George Stinney Jr.

The African-American boy was 14-years-old when he was accused of murdering two white girls in 1944.

A jury took just 10 minutes to find him

guilty despite no evidence to link him to the crime.

Two months later he was killed on death row without a chance to say goodbye to his family.

Unconfirmed reports claimed guards had to use a bible or telephone directory as a booster seat because at just 5ft 1ins tall and weighing 6st 7lbs, he was too small for the adult-size seat.

His sisters, Katherine Robinson and Amie Ruffner, along with their brother Charles, spent the next 70 years fiercely fighting for justice and finally, in 2014, a judge overturned George’s murder conviction.

Are you still human when you inflict such an unbearable pain on an innocent child?

Is this still a society?

There was hardly a lawyer who did anything to help this child.

A prime example of a broken legal system.

Justice on the wrong side of the law!

The Wild West of the legal state.

It has nothing to do anymore with fairness, honesty or what really happened

The justice system itself is finally being questioned.

George Stinney is not the only young boy innocent executed on the electric chair:

Justice is not whiter than white
Deception arises from the way in which the justice system operates
Justice becomes a crowbar and is no longer a scale
An error in the justice system can make a mess of a person’s life
(cfr. the mind-boggling examples on this page)

2 Anthony Ray Hinton: “I Spent 30 YEARS In Prison For A Crime I DIDN’T COMMIT!”

4 “I Spent 30 YEARS In Prison For A Crime I DIDN’T COMMIT!” | Anthony Ray Hinton

Goalcast
Anthony Ray Hinton was convicted and sentenced to the most extreme penalty for a crime he did not do because of the color of his skin. He spent 30 years in prison until, with the help of Bryan Stevenson, was released. Finally free and back in the world, Anthony has a message to share with everyone.
Anthony Ray Hinton spent 30 years in prison, convicted of crimes he did not commit. Racism and a justice system stacked against the poor were the driving forces behind his wrongful conviction. During his time in prison, he formed an unexpeted bond with a fellow inmate and former white extremists. This is his incredible story.
“I Spent 30 YEARS In Prison For A Crime I DIDN’T COMMIT!” | Anthony Ray Hinton – Blog

CBS Mornings
After revealing her new book club pick, “The Sun Does Shine: How I Found Life and Freedom on Death Row” by Anthony Ray Hinton, Oprah Winfrey and Hinton join “CBS This Morning” for a second part of their conversation to discuss what it was like for Hinton to find freedom after nearly 30 years on death row for crimes he did not commit.
Delivered by Norah O’Donnell and Gayle King, “CBS This Morning” offers a thoughtful, substantive and insightful source of news and information to a daily audience of 3 million viewers. The Emmy Award-winning broadcast presents a mix of daily news, coverage of developing stories of national and global significance, and interviews with leading figures in politics, business and entertainment. Check local listings for “CBS This Morning” broadcast times.
Oprah and Anthony Ray Hinton on death row, first night of freedom – Blog

CBS Mornings
Only on “CBS This Morning,” Oprah Winfrey is revealing her newest, highly-anticipated book club selection: “The Sun Does Shine: How I Found Life and Freedom on Death Row” by Anthony Ray Hinton. He spent nearly 30 years on death row for crimes he did not commit until he was released in 2015. Winfrey and Hinton join “CBS This Morning” to discuss Hinton’s story and the people like his mother and his friend, Lester, who impacted him.
Oprah Winfrey and Anthony Ray Hinton reveal next book club pick – Blog

The US has the highest incarceration rate in the world.
One out of three black men aged 18 to 30 is in prison, on probation or parole.
The US is the only country in the world that has life imprisonment without parole for minors.
For every nine people who have been executed, one is later found to be innocent.

ABC News
The film’s stars Michael B. Jordan and Jamie Foxx discuss their roles. An exonerated death row inmate and the attorney who freed him share their perspective behind the movie.

If someone beats the drum or bangs the drum for something, they support it strongly.

The trade secretary disagreed but promised to ‘bang the drum for industry’.

4 A perversion of justice

If someone perverts the course of justice, they deliberately do something that will make it difficult to discover who really committed a particular crime, for example, destroying evidence or lying to the police. [law]

Wendy Lane
You can donate to the Ohio Innocence Project online here: https://foundation.uc.edu/donate?id=4…

This video is very emotional

Justice can be fooled

that justice either on the basis of sheer incompetence

or in an organised manner and with outrageous sneaky practices

gets those who have done nothing wrong into trouble.

Justice opens the gates of hell with baseless claims:

‘Ricky Jakson’ was innocent in prison for 39 years,  on the basis of a child
who was blackmailed into giving false testimony.

This is horrible, Inconceivable, Inconprehensible, Unthinkable
In other words: what not can happen becomes reality

Such a thing no longer has anything in common with justice,

it is a form of Modern Day Slavery:

the deliberate exploitation of people who have done nothing wrong.

The dark side of justice.

The cracks in a broken justice system

if justice is handled in the wrong way and degrades to a plaything.

She was convicted of perverting justice for lying to the police.

Pervert the course of justice law

The two police officers were charged with perverting the course of justice by fabricating evidence in the trial.

(law) to tell a lie or to do something in order to prevent the police, etc. from finding out the truth about a crime

Some people believe that television can pervert the minds of children.

perverting the course of justice

Carrying out an act that tends or is intended to obstruct or defeat the administration of public justice. Common examples are inventing false evidence to mislead a court (in either civil or criminal proceedings) or an arbitration tribunal, making false statements to the police, stealing or destroying evidence, threatening witnesses, and attempting to influence jurors. The maximum penalty is life imprisonment and/or a fine. The common-law offence of perverting the course of justice overlaps with certain forms of contempt of court and with the separate offence of tampering with witnesses. It is not an offence, however, to offer money to someone to persuade him not to proceed with an action in the civil courts; nor is it an offence to offer to pay reasonable compensation to the victim of a crime, if he will agree not to take criminal proceedings (Criminal Law Act 1967 s 5(1). However, once he has made a statement to the police in connection with possible proceedings, it is an offence to attempt to induce him to withdraw or alter his statement.

“Law applied to its extreme is the greatest injustice.”

Two webpages are enough to understand

‘Preface’ and ‘An Undying Mystery’

The website is about a flaw in a fragile justice system that causes ordinary people who do not belong there, to get stuck in it. Even young children!

It deals with simple very clear black and white issues where the justice system is failing.

It is not about judging criminals but rather about everyday ordinary people who, because of a flaw in the system, end up in a dud street with a dramatic outcome.

Ricky Jakson, Anthony Ray Hinton, mentioned above 39 and 30 years innocent behind bars and so on.

It is beyond belief that such a thing can happen.

12 Man Gets Electrocuted and Falls into a Dumpster

Just For Laughs Gags
This man asks for help and, in the end, gets the shock of his life! Let us know how guilty you’d feel if you were caught in this situation!
Welcome to the world-famous Just for Laughs Gags channel, where we pull public pranks on unsuspecting Montreal residents and tourists
Part 1