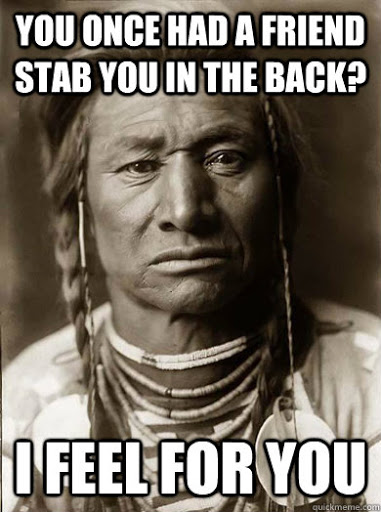 To harm someone who trusts you:

A lot of people in this business think they have to stab each other in the back to succeed.

behaviour that is bad and not loyal, especially from someone you trusted

Being replaced by her was a real stab in the back.

IDIOM: TO STAB SOMEONE ON THE BACK
Taking it literally, it means taking a knife or another sharp object and putting into a person’s back.
However, it means to hurt someone who was close to us and trusted us by BETRAYING them secretly and breaking their trust. We call the person who does this a back stabber.
“Did you hear that Sarah stabbed Kate in the back last week?”
“No! I thought they were best friends, what did she do?”
“She told their boss that Kate wasn’t interested in a promotion at work and Sarah got it instead.”
“Wow, that’s the ultimate betrayal! No wonder they’re not friends anymore.”

When I was a child
I did not live in the wild
My mother took care
But there was something strange in the air
I was made to feel different
The gossip was persistent
I did not know the reason
Had there been a treason?
I grew up with a secret nag
And now I have a tag
People judge me and it makes me sad
One should not, It is bad
I hate racism/snobbism
It is a masked pessimism
We are all the same
There should be no shame

Just For Laughs Gags
Thief is running from the cops and jumps into a garbage can to hide, while prank victims point out to the frazzled cop where the culprit went. But just as the police officer looks into one garbage bin, the robber pops out of the other one, in what quickly becomes a very confusing, Scooby Doo game of hide and seek.
A presentation of JustForLaughsTV, the official Just For Laughs Gags YouTube channel. Home of the funniest, greatest, most amazing, most hilarious, win filled, comedy galore, hidden camera pranks in the world!
Back to menu