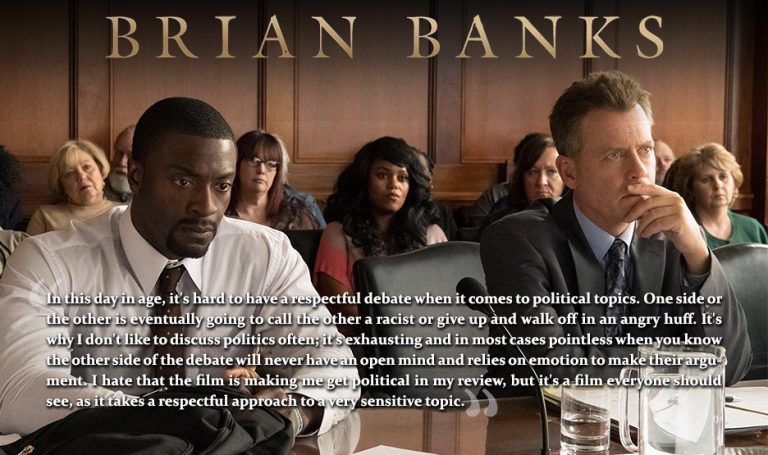 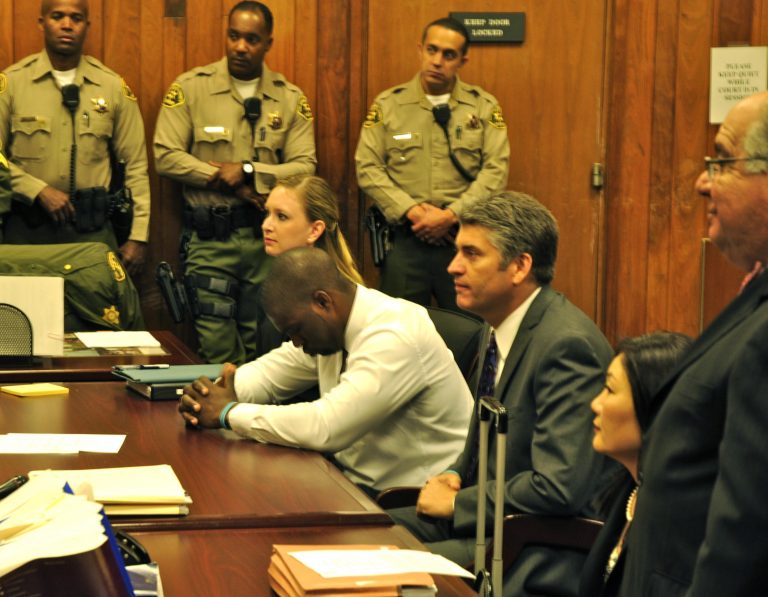 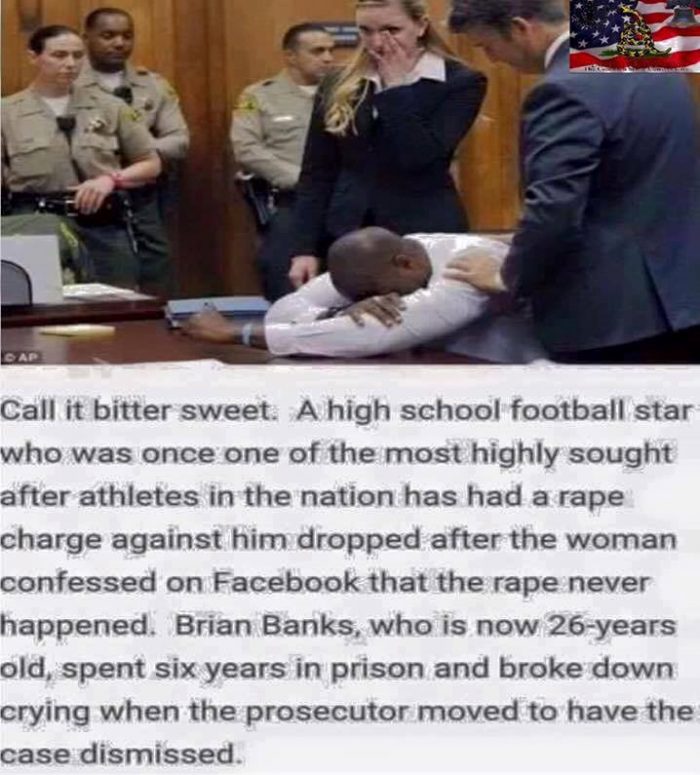 LONG BEACH, Calif. (KABC) — After a decade, it was the judgment that Brian Banks and his lawyers from the California Innocence Project fought for: Case dismissed.

“My only dream in the world was to just be free and to have the same opportunity as everybody here,” said Banks following Thursday’s hearing.

At age 16, Brian Banks had been a popular student at Polytechnic High in Long Beach, an athlete being scouted by eight colleges.

He verbally accepted an offer to attend the University of Southern California on a four-year scholarship when a serious accusation came from a fellow classmate and childhood friend.

Wanetta Gibson, then 15 years old, claimed Banks had raped her at school. With a case of he said she said, Banks did as his lawyers urged — to plead no contest and accept a short prison term rather than risk a long one.

Gibson collected $1.5 million after suing the school. Banks spent five years in prison and five years on parole, finally reaching out to California Project Innocence. But the case turned when the alleged victim contacted him through Facebook asking to be his friend.

2 Wrongfully Jailed For Rape As A Teen, He Now Helps Others Falsely Convicted | Megyn Kelly TODAY

TODAY
Accused of rape by a fellow student, Brian Banks accepted a plea deal and went to prison on his 18th birthday. Years later he was exonerated with the help of the California Innocence Project. He’s joined on Megyn Kelly TODAY by Project director Justin Brooks and former prosecutor Loni Coombs, with whom he now examines other potentially wrongful convictions on the series “Final Appeal.”

Bleecker Street
Watch the official trailer for BRIAN BANKS. In theaters August 9th. — The inspirational true story of Brian Banks (Aldis Hodge), an All-American high school football star committed to USC who finds his life upended when he is wrongly convicted of a crime he didn’t commit. Despite lack of evidence, Banks is railroaded through a broken justice system and sentenced to a decade of prison and probation. Years later, with the support of Justin Brooks (Greg Kinnear) and the California Innocence Project, Banks fights to reclaim his life and fulfill his dreams of playing in the NFL.

NowThis News
Football star Brian Banks spent 5 years in prison and another 5 years on probation after being falsely accused of rape — but he doesn’t want his story to diminish survivors’ stories.
In US news and current events today, Brian Banks sat down with NowThis News to talk about being one of many exonerated prisoners found to be innocence by the Innocence Project and other organizations like it. The Brian Banks story as explained by Banks is that he was at the top of high school football and had a promising career, but was derailed after being falsely accused of rape and then caught in a wrongful conviction. Documentary shorts like this highlight the innocence project cases that could help change the criminal justice system. A new film about Brian Banks highlights his story.
NowThis is your premier news outlet providing you with all the videos you need to stay up to date on all the latest in trending news. From entertainment to politics, to viral videos and breaking news stories, we’re delivering all you need to know straight to your social feeds. We live where you live.

Christine Devine
Brian Banks continues to tell his story. It’s aired on national news, on Jay Leno, even 60-Minutes. But none have what I witnessed when welcomed into his mother’s home.
It’s been less than a year since Banks was cleared of a crime that sent him to prison for five years and on parole for another five. Thanks to the California Innocence Project he walked out of a courtroom a truly free man, exonerated of a crime he says never happened. His mom says she’s still “grinning from ear to ear.”
While it was among the first times his mom, Leomia Myers, was talking in depth about it, it was his baby brother who stunned and silenced mom’s living room. Brandon broke down, sobbing over what was lost and what could have been. His mom told me these brothers had never had this conversation. The two embraced long and hard with Brandon saying “I love you, man.”
Read more: http://www.myfoxla.com/story/21785485… 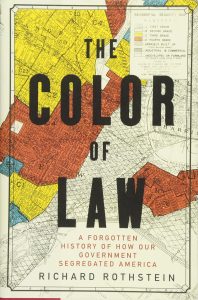 CBS News
Brian Banks speaks to the “CBS This Morning” co-hosts about his years in prison, and his new life after being exonerated of a rape he didn’t commit.

Black & Blonde Media
10/2/16 – For more information, go to https://www.blackandblondemedia.com/2… FAIR USE The use of media materials is protected by the Fair Use Clause of the U.S. Copyright Act of 1976, which allows for the rebroadcast of copyrighted materials for the purposes of commentary, criticism, and education.

11 How A Private Investigator Got The Confession THAT HELPED EXONERATE BRIAN BANKS!!!!

Back to menu
Read moire

Speak For Yourself
Brian Banks discusses his inspirational story of being wrongly convicted of a crime he didn’t commit. Banks talks not being bitter and NFL career.

The first time I heard Brian’s story was on the old Rich Eisen podcast… it was so impactful. I’m glad the world gets to hear his story and hopefully it can impact others.

17 Drunk Soldier Forgets About His Kid